Cancel Culture: The Stifling of Open Discourse on the Internet 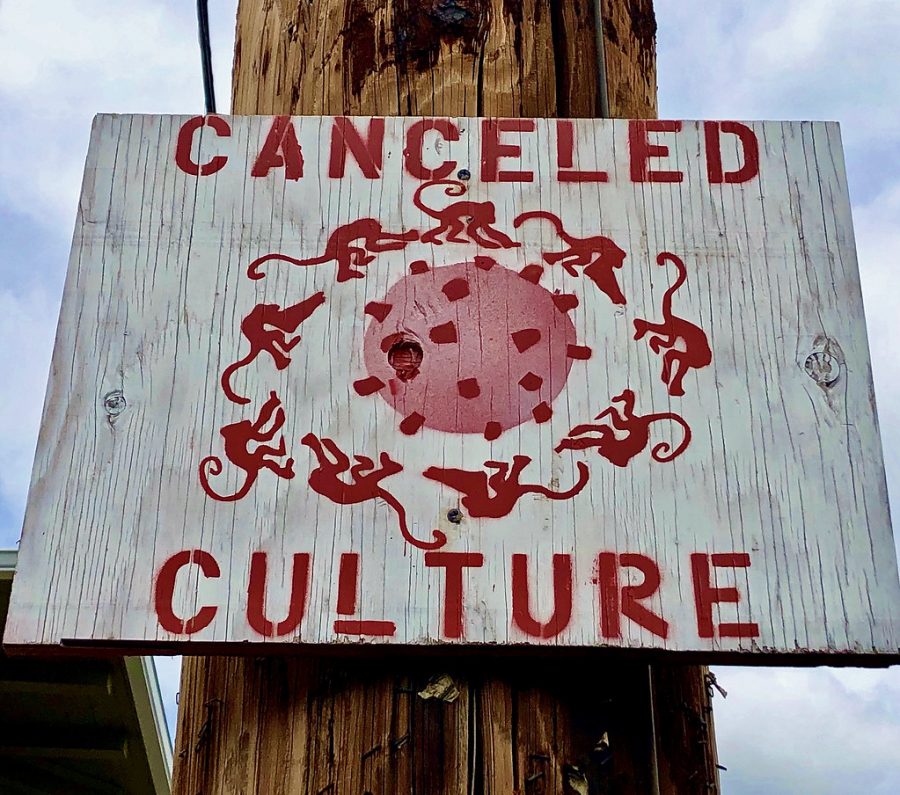 Many celebrities, and even high school students, have been subjects of "cancel culture."

Has anything ever slipped out of your mouth without you meaning it? Have you ever done something you instantly regretted? Everyone has, and these mistakes are important learning opportunities in our development as humans. Has one of these accidents ruined your entire reputation? Then you’ve been “canceled.” According to dictionary.com, “canceling” someone is the practice of withdrawing support for someone or a company after they have done or said something interpreted as objectionable or offensive. Once you are “canceled,” it is nearly impossible to restore your reputation. Cancel culture in 2020 has put every action of celebrities, companies, athletes, and many more under intense scrutiny. It’s a way for the general population to be able to exercise some influence over those in power, but unfortunately, not in a constructive way. Everyone makes mistakes, and the rise of cancel culture in the U.S. neglects to allow people the opportunity to grow and learn from those errors. Cancel culture shuts down conversations — it doesn’t allow for civil discourse to occur about sensitive subjects and therefore doesn’t include room for learning experiences.

So what meets the criteria for being “canceled”? The variety of actions is broad, from someone simply saying something offensive, to a company donating money to a controversial group. Of course, some people are offended by things that other people simply don’t care about, or even support. Due to this, each time a contentious video or quote comes out, certain people are quick to defend the person/group in question, while others rush to attack them or boycott their brand. Boycotting and “buycotting,” or the practice of purchasing products from a company to show support, have varying results, though more often than not they have no real effects. When people themselves are “canceled,” however, it has a much larger impact.

Take Mr. Beast, for example. He’s a popular YouTuber, famous for his over the top charitable stunts, including giving away thousands of dollars to people in need and raising money for over 20 million trees being planted to help with deforestation. In 2016, Mr. Beast was 17 years old and was just getting started in the YouTube industry. He released a video, now deleted, titled “I SEXUALLY IDENTIFY AS AN ATTACK HELICOPTER.” In the video, he tapes cardboard to his arms, and spins around, pretending to be a helicopter. He also says “I was born a tank, but sadly it wasn’t one of our 52 genders… Is someone just sitting there and getting paid to think of genders?” Mr. Beast’s defenders have pointed to his age at the time, as well as his generosity and overall kind-heartedness to show that he should be forgiven, not to mention the fact that there is a heightened awareness of what’s politically correct to say now in 2020 that didn’t exist in 2016. On a post about the video in question, one Twitter user commented “I think this is just his ignorance. We were all a bit less educated in 2016, I hope and believe he has grown and evolved since then.” However, his detractors say he should’ve known better. In the same post, another user replied with “People citing the year as some sort of excuse for this behavior need to (quiet down). Transphobia is/was/will never be ok. Regardless of the time it happened.” Despite the fact that in recent years, he’s done nothing but help his community and bring good into the world, many still think his words were unforgivable.

Another example is Bob Unanue, CEO of Hispanic food company Goya Foods, a company that supports nearly 300 charitable endeavors, scholarships, and programs. Bob Unanue came under heat in early July of 2020 after sharing his support for President Donald Trump at a meeting located in the White House. Unanue said that the U.S. is “blessed to have a leader like Donald Trump,” and subsequent to the event, #GoyaAway and #BoycottGoya began trending on Twitter and other social media platforms. Even Alexandra Ocasio-Cortez, U.S. Representative for New York, posted a tweet implying she would discontinue purchasing from the company. As a popular politician in the public eye, many think she should be above canceling an entire company, which could lead to jobs being lost or food being wasted. One SHC junior, who wished to remain anonymous, remarked that “boycotting large corporations like Goya Foods isn’t dangerous because nobody’s livelihood can be destroyed. Regardless, AOC should not have elicited the canceling of Goya because it’s a little bit immature to do as a congressperson.” Ocasio-Cortez’ tweet, along with countless others, prompted a trend of burning Goya products and throwing them in the trash while filming and posting on Twitter. The Trump administration has given a great deal of aid to farmers, including around $28 billion in assistance from 2018-19. Increased tariffs on Chinese imports caused China to retaliate against American exports, particularly in the agricultural sector, and the President was forced to support farmers across the country with government aid. It’s clear to see why the CEO of a major food supplier would be on board with an administration that consistently helps farmers. Bob Unanue was showing his gratitude to an organization and president who has helped him and his 4,000+ workers. The context of his comments meant nothing to people across the country, who’d rather look past their charity and boycott an entire company simply because of one person’s political views.

Cancel culture has been weaponized into an extremely toxic way of shutting down conversations. There is, however, some potential for positive outcomes by showing people the error of their ways and educating them so that they might learn from their mistakes after being bombarded with comments online. As Brianna Kyne ‘23 put it, “If someone uses a discriminatory word, instead of canceling them, they should sit down with someone who has gone through that experience and listen to their story and learn why they shouldn’t be using racist language.” However, this rarely, if ever, happens in today’s world, with an overwhelming amount of hate and negativity being hurled towards anyone who’s found to have made a mistake. It would take a change in the attitude of millions of social media and internet users to change the aim of ruining lives to educating and spreading awareness, which would be the best application of the time and energy people now dedicate to canceling someone. Ruining careers over political views and small mistakes from years ago is the unfortunate reality of what the relatively new phenomenon of cancel culture has become in 2020. Without allowing apologies to be made for actions from one’s past or uneducated mistakes, it’s hard to see a positive future for cancel culture becoming a reality.