The Russian Invasion of Ukraine 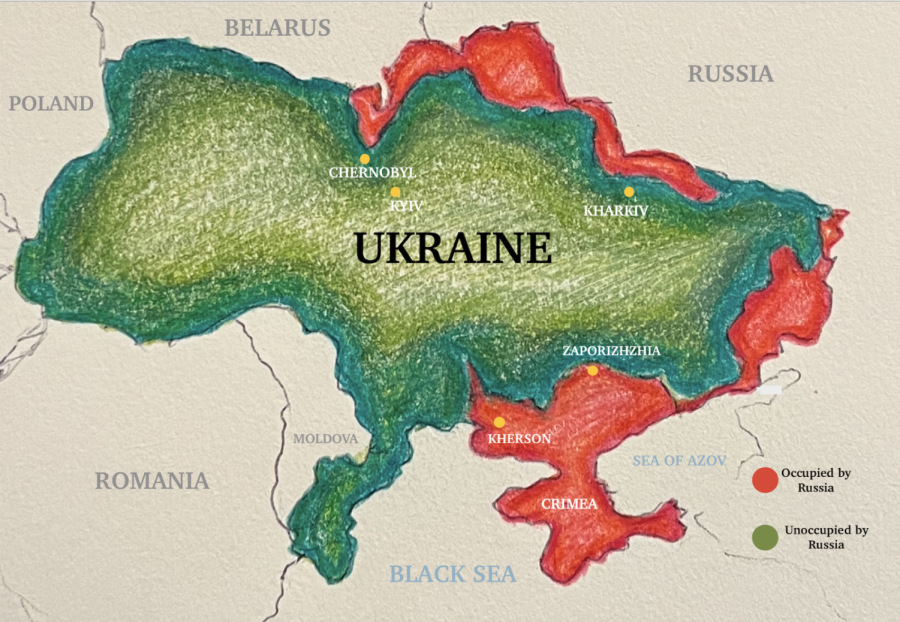 Map of Russian occupation in Ukraine as of March 6, 2022. The red-shaded areas are taken over by Russia, and the green is un-conquered. Kyiv, Chernobyl, Kharkiv, Zaporizhia, and Kherson, are marked with yellow dots.

We will continue to monitor and update this dynamic situation.

The recent invasion of Ukraine began on February 23rd. As of March 6th, there have been an estimated 364 civilian casualties and 759 injured civilians in Ukraine, according to the United Nations human rights office. In addition, Filippo Grandi (the head of the U.N. refugee agency) stated that over 1.5 million Ukrainian refugees have fled to neighboring countries since the initial invasion.

Russian forces have ruthlessly attacked civilians and Ukrainian troops throughout these past few weeks by bombing densely populated areas. Targeting civilians is a war crime. Using the vacuum bombs that diplomat Linda Thomas-Greenfield stated were transported within the 40-mile Russian convoy outside Kyiv is also considered a war crime. Greenfield brought this issue to the attention of her colleagues in her address to the U.N. on March 2nd. These munitions are banned because of their lethal ability to vaporize a human body. Putin further sent troops to seize Zaporizhzhia Nuclear Power Plant on March 4th, cutting off 4 million homes from their electricity. Depriving civilians of “objects indispensable to their survival” is also considered a war crime. As Ukraine’s largest power plant, Zaporizhzhia is heavily relied on to power the country. Cutting civilians off from electricity creates brutal living conditions, especially for the Ukrainians living in bomb shelters.

The evacuation of Mariupol, a city in southeastern Ukraine, failed miserably on Saturday, March 5th. During a temporary cease-fire, Russian forces shelled areas near the corridors being used as an evacuation route for civilians.

Many Ukrainians call for the United States to do more, such as putting soldiers on the ground and establishing a no-fly zone over Ukraine. Unfortunately, this no-fly zone is a risk that our legislators are unwilling to take because any unauthorized aircraft flying over Ukraine would have to be shot down. This would lead to a rapid conflict escalation and hundreds of thousands of deaths, which explains why NATO rejected the proposal on March 4th. According to the Washington Post, Putin made his first public statement since the start of this war on March 5th, threatening that “current leadership needs to understand that if they continue doing what they are doing, they risk the future of Ukrainian statehood.” NATO, not wanting to enable Putin but also attempting to avoid nuclear catastrophe, continues to offer aid to Ukraine from a distance. However, as Biden warned in his State of the Union address on March first, “the United States and our allies will defend every inch of territory that is NATO territory with the full force of our collective power, every single inch.”

This war has had a dramatic effect on the global economy. The American stock market especially is experiencing detrimental effects, while the Moscow Stock Exchange has been closed since February 25th. The Wall Street Journal recorded that S&P 500 (market index tracking 500 large U.S. companies) dropped 2.95% as of March 7 because of the war. Looking at the U.S. stock market futures, gold and oil are predicted to soar, while the rest of the stock market tanks. U.S. oil reached a record price of $130 per barrel, compared to its price of $50 per barrel in January of 2021.

Gas prices have risen at an extortionate rate at most stations. The San Francisco gas station pictured below posted a rate of $5.49 per gallon of regular gasoline as of March 6th. Their rate for the same type of gas in March of 2021 was $3.99. Another concern is Russia and Ukraine’s export of wheat and barley, which is heavily relied on globally. NPR reports that Russia supplies over 30% of the world’s wheat supply and, combined with Ukraine, accounts for 30% of the global barley supply. The war will have a detrimental impact on the price and availability of food worldwide.

1.5 million Ukrainian refugees fleeing the country went to Poland, while the rest sought shelter in Moldova, Slovakia, Romania, and Hungary. The vast majority of these refugees are women and children because Ukrainian president Zelensky ordered men aged 18-60 to stay and fight to ensure Ukraine’s ability to resist Russia. It is a necessary action but tore apart families. Ukrainian women and children say goodbye to loved ones, often aware that they may never see each other again. A lot of this is unfathomable for most people — teenagers no older than some seniors have to pick up weapons and fight for their country. Many recruits are untrained. Most have never held a gun before, let alone been prepared to shoot someone.

Other sites of Russian bombs and missiles in Ukraine include an opera house in Svobody Square (or Freedom Square), and Babyn Yar Holocaust Memorial in Kyiv. Both of these attacks occurred on March 1st and sparked outrage because of their blatant disrespect for Ukrainian monuments. Kherson is the first city that fell to the Russians on March 2nd, after a bloody battle leaving the city’s Ukrainian inhabitants without power and water. The citizens fear for their lives and cannot leave their houses; Andriy Abba, a Kherson resident, revealed to CNN, “they shoot at anyone who tries to leave.”

During his State of the Union address, President Biden declared that Putin “…met a wall of strength he never anticipated or imagined. He met the Ukrainian people.” Many citizens of Kyiv remain to defend their city and refuse to roll over for the Russian forces. Their president exemplifies the resilience and determination of the Ukrainian people. Zelenskyy remains in Kyiv and has made no indication of intending to leave.

International Perspective: How drastically French and American societies will be impacted by the war:

“The invasion of Ukraine is creating a new international order that is very worrisome. I think that so much is at stake with this conflict; for one thing, it showed the nations in the European Union that beyond an economic market, they need to establish a strong political and military union. They don’t know if they can rely on the United States to protect them in the long term as they are not sure the American people will vote for a leader committed to NATO in the next election cycle. For France and many European nations, the influx of refugees, the dependence on Russia for gas and other fossil fuel energies will have an immediate societal and economic effect, and the fear of a nuclear accident or threat is in everybody’s mind. For liberal and Western democracies and their citizens in France and the United States, for example, the threat posed by authoritarian leaders in Russia and China should serve as a warning of what could be if they elect leaders with nationalistic and authoritarian tendencies.”

How do you think this conflict is going to affect the lives of us all, not just the people living in Russia and Ukraine?

What’s happening in Ukraine impacts the whole world because I believe we’re all global citizens who have a responsibility to care for, defend, and protect all of our brothers and sisters against dictatorship. I think it’s very tempting for people to dismiss the Russian-Ukrainian conflict as someone else’s problem because, to be frank, the world is really hard right now. Everyone is so weary after these years in the pandemic, and every person has their own struggles to manage, but I think that’s what makes it so important for us to remain steadfast in our support of Ukraine and a speedy, diplomatic end to this invasion.

How long will that impact last?

If a historical view of the world has taught us anything, it’s that conflict reverberates. This isn’t an issue that will remain isolated to Ukraine and Russia if we just turn a blind eye; it sets a precedent for what is acceptable behavior in our world, so we all have to decide if we are going to stand in solidarity with the nation fighting for their sovereignty and democracy now, or whether we can, in good conscience, remain silent as a despot pursues the expansion of his own power at the cost of human lives and liberty. If we choose the latter, there’s no telling how long or to what extent the consequences will continue to plague us.

Our own country’s origin story is steeped in the ideal of freedom from tyranny and the right to self-governance, so if we are to live up to our nation’s creed, then we should all care deeply about the ongoing humanitarian crisis and attacks on freedom and democracy that we’re seeing in Ukraine right now.  I stand with diplomatic efforts and decisions that reflect a condemnation of Putin’s actions while also, more importantly, attempting to restore peace and protect lives in every nation.  I would echo Pope Francis’ call to “let the guns be silenced.”

How do you feel about the ongoing war in Ukraine?

This war exemplifies the fact that you do not need to be in the army to fight. I am so proud of the retaliation from civilian citizens. I love hearing about the little or large-scale things that all people, especially women are doing. It takes so much bravery to do that. 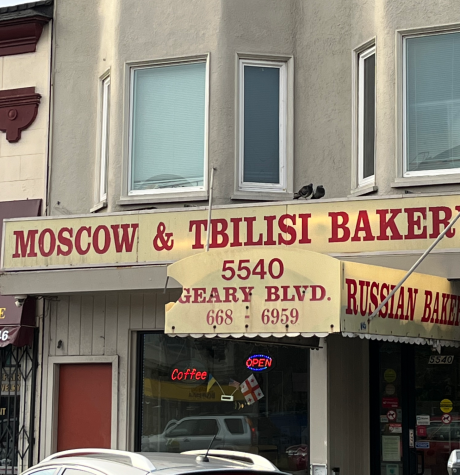 What you can do to help:

Ukraine is a strong, united nation, but right now, its people need support. Donating to organizations dedicated to sending aid to Ukraine, writing letters to local or nonlocal government officials urging them to do the same, conducting and contributing in class discussions about the war, and staying informed about the conflict are some ways to help. Additionally, look out for efforts being made by SHC’s Advocacy in Action, Women’s Empowerment, and other clubs including the Emerald to provide relief. Here are some links to organizations sending aid to Ukraine:

UNICEF helps children in the crossfire of the Ukraine crisis.
The International Committee of the Red Cross provides medical care and basic necessities for the Ukrainian people.
The World Central Kitchen provides meals for Ukrainians.
The Lasallian Effort to Help Ukraine: provides relief for Ukraine refugees.