Becoming An Ally to the Asian American Community 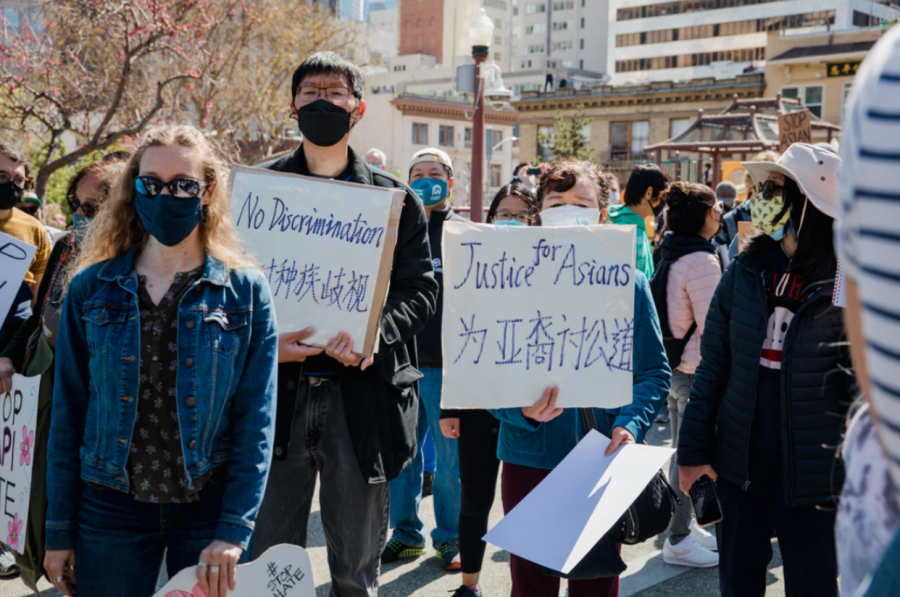 Demonstrators gather in San Francisco to protest the recent uptick in anti-Asian-American violence in the United States.

Over the last several months, there has been a dramatic increase in violence against the Asian American community across the United States. In recent weeks, there have been several incidents of assaults on older Asian American residents in San Francisco, including two elderly women stabbed mere minutes away from SHC on Fifth Street. Though hate crimes fell in the U.S. in 2020 overall, hate crimes against Asian Americans in major U.S. cities rose by nearly 150 percent. Many attribute this massive increase in anti-Asian violence to the COVID-19 pandemic, which former President Donald Trump blamed almost exclusively on China. Trump has continually called COVID-19 the “China virus,” most recently on Fox News the same night as the Atlanta shootings, which caused the deaths of six Asian American women. His supporters have echoed his slurs, and some Americans have begun taking matters into their own hands.

Racists have attacked Asian Americans across the country in seemingly a sick form of revenge. According to the Pew Research Center, three in ten Asian Americans report having experienced racial slurs or racist jokes since the beginning of the pandemic. Likewise, the organization Stop AAPI Hate recorded 3,795 hate incidents in the period between March 19, 2020, and February 28, 2021, with nearly 300 of those incidents in San Francisco alone. Verbal harassment made up about 68% of the self-reported incidents, with physical assault constituting more than 11%. During this almost year-long period, several national trends became clear. Asian American women reported hate incidents 2.3 times more than Asian American men. Interestingly, youth (0-17 yrs. old) reported 12.6% of incidents, more than twice the number of seniors (60 yrs. or older) at 6.2%.

The remarkable frequency of anti-Asian hate incidents, and the fact that more youth report incidents than seniors (although seniors are more often highlighted in media reports on this issue) suggest both that members of the SHC community may be targets of anti-Asian bias and that we as a community should consciously address such racist behavior.  Our school community is continuing its practice of acknowledging, condemning, and working against racial violence in all forms. The Asian American Student Union recently held a mental health check-in/information session for students and faculty. Support for our Asian American students is especially necessary given the greater stress and fear caused by these senseless attacks. Kimberly (Kim) Ngan ‘23 said, “It is quite sad that Asians are being targeted and are being used as scapegoats. The thing is that this is not the first time that Asians have experienced this. For example, the Asians that were shot in Atlanta. The police claimed that the shooter was having a bad day and I think that it is unacceptable that they are ignoring this hate crime. We should be speaking up about these things to avoid having more incidents like this.”

However, information sessions and condemning statements are only one aspect of an effective response. To truly aid the Asian American community, one must both be informed and willing to step in. The SHC community fulfills the first requirement, but the second is up to each individual. Detailed below, PBS Newshour has compiled a list of things people can do to help prevent and fight hate towards Asian Americans:

Supporting the Immediate Needs of AAPI Groups in Georgia – The fatal attack in Atlanta, Georgia has left many heartbroken and more stunned. The organization Asian American Advancing Justice – Atlanta has made calls to local and state governments to provide “crisis intervention resources, including in-language support for mental health, legal, employment and immigration services.” The organization has also made community callouts to:

Sign their collective community statement
Donate to the Atlanta victims and their families
Share resources you can offer to the victims, their families, and other community members like language translation, mental health services, legal services, childcare or food assistance.

Speaking Out and Reporting – Despite encouragement to step forward, one must assume that many of these hate incidents go unreported. Some may not fully understand the connotations behind the incident, but others will likely feel ashamed and afraid at the prospect of coming forward. A quick way to become an ally to the Asian American community is to step forward in the moment and report incidents. A large part of the lasting mental health toll as a result of hate incidents likely comes from lack of support during the incident. “Over and over again, we heard from respondents [who submitted reports of hate] that it was hurtful to be targeted,” said Cynthia Choi, Stop AAPI Hate’s co-founder, in a discussion with PBS Newshour. “But it was even more hurtful to have no one stand with them — no one intervened when clearly they were being targeted because of their race, ethnicity, and gender.”

The Southern Poverty Law Center’s “Speak Up” strategies suggest four steps when responding to coronavirus racism: interrupt, question, educate and echo, and explains each of them in this guide. And the Anti-Defamation League has guides in English, Spanish and Arabic for how to respond to hate.

Checking in with your Asian American Peers – Margaret Huang, President and CEO of the Southern Poverty Law Center (SPLC), said one of the most important things to do is to ask the Asian Americans in your life what you can do to support them. That could be something as simple as offering to help them go to the grocery store or to run an errand. “People are very afraid, and I think those gestures could make a lot of people really reassured that they are part of our larger American community,” said Huang while being interviewed by PBS. This is important for SHC students especially, as young people appear to report hate incidents more frequently than seniors, despite media attention. Also, the school’s mission is to provide the finest education in an inclusive Catholic community of faith, which cannot be done if its students are discriminated against.

In addition to the PBS Newshour resources, students can take action to support the Asian American community in many other ways. Students can also educate themselves or report their own experiences on the Stand Against Hatred website, which publishes the stories of Asians and Asian Americans who have suffered incidents of xenophobia (such as being subjected to Asian racial slurs on public transportation, employees being called “Coronavirus” by supervisors, and an 11-year old girl whose classmates told her they wished COVID would go back to China and kill all the Chinese people). Students can also donate to any number of organizations, such as Feed + Fuel Chinatown, which seeks to address the needs of vulnerable Chinatown businesses and residents; and Hate Is a Virus, whose mission is to combat xenophobia through education and philanthropy.

As California Supreme Court Chief Justice Tani Cantil-Sakauye eloquently expressed in a March 19 statement on the official website for California judiciary, “As we pass and approach many anniversaries relating to the pandemic, it is disheartening that while we have made progress on the virus, the disease of racism remains.” Student aid for Asian Americans will not eliminate the disease, but our efforts may help lessen the burden and pain of those affected.