Working as a Poll Worker in San Francisco 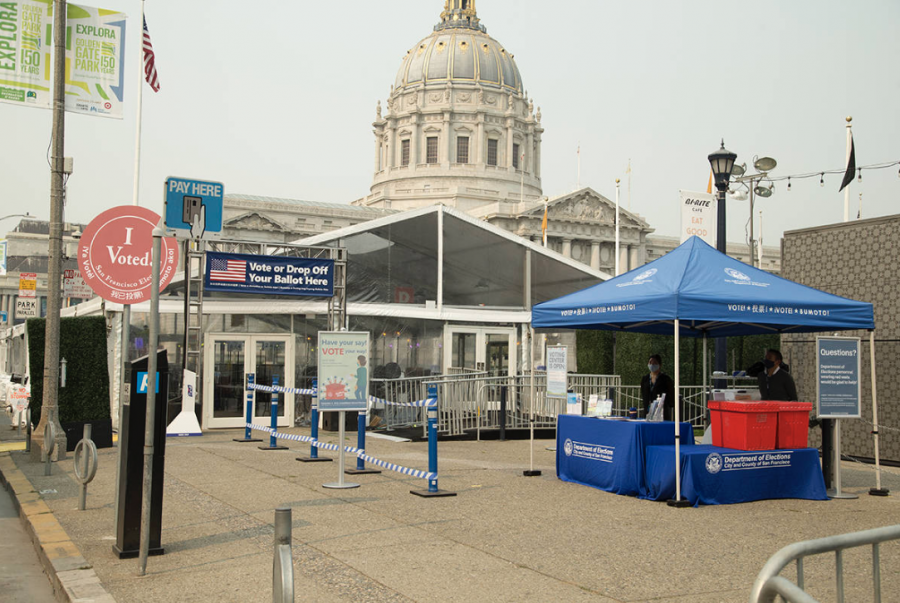 On November 3rd, 2020, citizens across the country got up, got out, and voted. In order to facilitate the highest voter turnout in over 100 years, a large amount of poll workers were necessary. This was my first year volunteering as a poll worker, and it was an eye-opening experience.

Poll workers are always important for many reasons, but in this election, when many new and important steps regarding safety and COVID-19 were being taken, they were even more critical. Because of the virus, there were more jobs, and people who volunteered at the polls had to be physically distanced in order to prevent the potential spreading of the virus. Because there were more roles to take on, each poll worker had to be prepared for anything. Usually, poll workers attend an in-person presentation showing exactly what they’ll be doing and what material they will be working with prior to election day. This year, volunteer poll workers watched a condensed online presentation.

The Department of Elections worked hard to assign each poll worker a station that was near their home. I was given a polling station that was in my zip code, so the night before election day, I set my alarm for 5:15 a.m. and went to sleep early. Because my polling station was so close to my house, I was able to walk and arrived by the expected arrival time of 5:45 AM.

Out of the seven poll workers at my precinct, I was the only high school student. We quickly introduced ourselves, then got to work setting up the ballot boxes, greeter table, and election desk. Our Inspector (the person in charge of the polling place) gave each of us specific tasks to do. It took an hour to set everything up, and by 7:00 AM, we were ready to take in voters.

When we first opened the polls at 7:00 AM, there was a bit of buzz. For the first hour, a steady stream of voters filed in, but over half of all voters were just dropping off their mail-in ballots. To drop off their mail-in ballots, voters had to simply put it into a sealed red box. Many were worried about leaving their ballots in this box — I had multiple voters ask me if it was safe to do so, if I was sure that their votes would be counted in time, or even counted at all. To be clear, it is completely safe to vote-by-mail or drop off your ballot at a polling place.

Each poll worker only gets three 15 minute breaks and two 30 minute breaks for their marathon 16 hour shift. My polling place was only a few steps from my house, so I used my breaks to check in on my family, watch the news, and get a snack. The day was fairly monotonous, and even though it felt slow at times, looking back everything seemed to go by fast. By 7:30 PM, we began to discuss our strategy for closing the polling station.

Now, closing the polls and disassembling everything was an extremely difficult process. All of us had been up since before 5:45 AM, and it was now 8:20 PM. We had to verify the number of ballots turned in, count the mail-in ballots, count the remaining unmarked ballots, void any ballots that needed to be voided, take down the polling stations, clean up, and sort all remaining materials into bags that would then be picked up. By the time all was said and done, it was around 9:45 PM, and we had yet to call the Sheriff’s Deputy who would pick up all the materials. At this point, I asked if it was okay for me to head out, since I still had a bit of homework to finish, and all of the other volunteers gave me the “go ahead!” So at around 10:00 PM, I arrived back at my house.

Working at the polls required a lot of work and focus. I had to learn new skills and talk to many strangers about topics that I was not too familiar with myself. But, as Sydney Scott ‘22 put it, “it was rewarding to fulfill my civic obligation, especially since I’m not old enough to vote. Watching the ballots being counted on the news later that night made me realize how much impact this simple contribution made in the grand scheme of things.” Eric Coestad ‘21, the Emerald’s Editor-in-Chief, said “serving as a poll worker was a great way to experience democracy in action. Most San Franciscans voted by mail, but it was rewarding to assist members of the community—especially elderly ones—in exercising their right to vote!”

Serving as a poll worker introduced students firsthand as to the logistics of our democratic process, and was a reminder of the work that is required to maintain our democracy. One of the heads of SHC’s Advocacy and Action club, Gabrielle McMillian ‘22, said, “As someone who’s never voted before, serving as a poll worker gave me a great insight into the democratic process and, even though not very many people came to vote in person, those that did were respectful and enthusiastic to make their voices heard!” High school students this year seemed to be very motivated to work at the polls because many of us are not yet old enough to vote, and through volunteering, we were able to see the inner workings of our country’s democracy. Similarly, the other head of the Advocacy and Action club, Graciella James-Hickey ‘22, said, “Perhaps the most inspiring was seeing numerous interactions between parents and their first-time voting children, and seeing the expressions of pride in their children as they cast their first ballot, who are the future of democracy. Poll working allowed me to understand the critical role our generation plays in democracy, even if we are ineligible to vote, especially amidst a pandemic.”

According to ABC 7, “In years past, polling locations have typically been staffed by older volunteers,” and then went on to state that this year, a vast majority of poll workers were Gen-Z and Millenials. It seems that many felt a renewed sense of pride in our democracy, and took it upon themselves to take action. Serving as a poll worker was a wonderful and once in a lifetime experience. Even though my day was long, and a little confusing at times, I strongly recommend working the polls in the future: it’s the best way for ordinary people to get involved in our democracy.