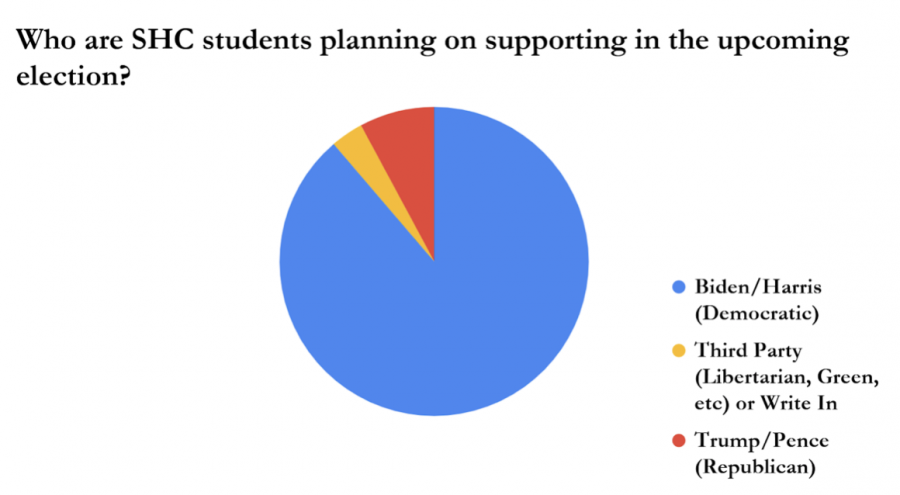 In anticipation of the 2020 Presidential Election, the Emerald asked SHC students their opinions on the candidates, issues, and more. With almost 300 responses divided proportionately among the different grades, these results depict the diversity of thought that exists within SHC and provide insight into how the next generation of voters will vote.

ISSUES MOST IMPORTANT TO SHC STUDENTS IN 2020

SHC students reported that the most important issues for them in the 2020 election are the handling of COVID-19, climate change, and racial justice. Over the past 6 months, these topics have been highly publicized and widely discussed among the candidates. Donald Trump’s response to the COVID-19 crisis has been criticized, including by one student who remarked that his “handling of the COVID-19 pandemic has been a complete embarrassment to the American people.” This view appears to be common among students as over 27% of students cited this as their most important issue, 97% of whom support Joe Biden. 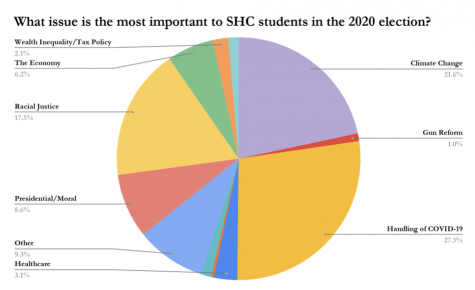 Although 18% of students believe that racial justice is the most important issue for them, not all SHC students view this issue the same way. One student remarked that, although they put racial justice as their most important issue, they were referring to “‘Reverse-Racism’ […] where people are extra-nice to a certain race.” However, a majority of students believed that racial injustice should not be tolerated with many calling Trump a “white supremacist” and “racist” in the comments.

SHIFTING VALUES: HOW HAVE THE ISSUES MOST IMPORTANT TO STUDENTS CHANGED SINCE LAST YEAR? 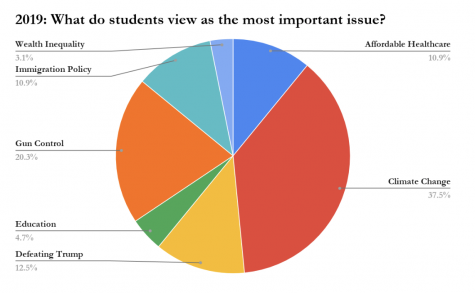 This may be attributed to the prevalence and apparentness of mass shootings in the media at the time. In November 2019, the month this survey was conducted, there were 5 school shootings alone, making this issue a hot topic for students. With many schools implementing distance learning resulting in fewer school shootings, gun reform may not appear to be as pressing of an issue to students.

Though a majority of SHC students are too young to vote, they are choosing to participate in the election in other ways. 90% reported they had watched at least one of the presidential debates and 75% said they watched the vice presidential debate. Additionally, 83% of students reported they have been following election-related news. Out of those that responded to the poll, 19 SHC students are serving as poll workers and 47 students have made calls or written letters. 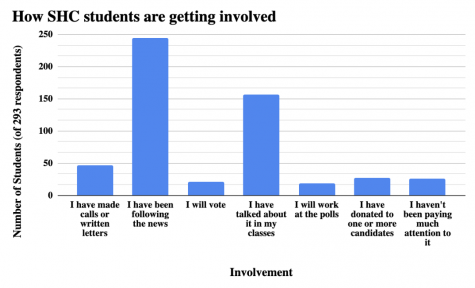 Here are some anonymous opinions from the 41 students who chose to comment on the coming election:

“I hope everyone who is able to vote will do so this presidential election because everyone’s vote matters.”

“The confirmation of Amy Coney Barrett solidifies my support for Joe Biden for the sake of our future democracy.”

“[The state of our country] has worsened tremendously under the horrible leadership of Donald Trump, we must do everything in our power to ensure our country does not fall into his hands again.”

“I don’t really support either, this election is more of a lesser of two evils.”

“By “Racial Justice” I mean “Reverse-Racism,” a term I came up with. It’s where people are extra-nice to a certain race. This is also tied to political correctness, which I feel is kind of an infringement on freedom of speech.”

“American politics are a disaster (the news, case in point) and if this generation doesn’t do something really big we’re headed very quickly in the direction of one extremist ideology or another.”

“Donald Trump’s handling of the Covid-19 pandemic has been a complete embarrassment to the American people. His negligence cost lives. It is incredibly urgent for everyone to vote Blue in 2020.”

“Republicans choose party loyalty more often over their individual morals. I wish more conservatives would check their values and realize that their egos are less important than the future of our country.”

“Donald Trump has done a great job the past 4 years and I don’t see a reason why he shouldn’t get reelected.”

For more coverage of the 2020 Presidential Election, continue to follow shcpemerald.org!