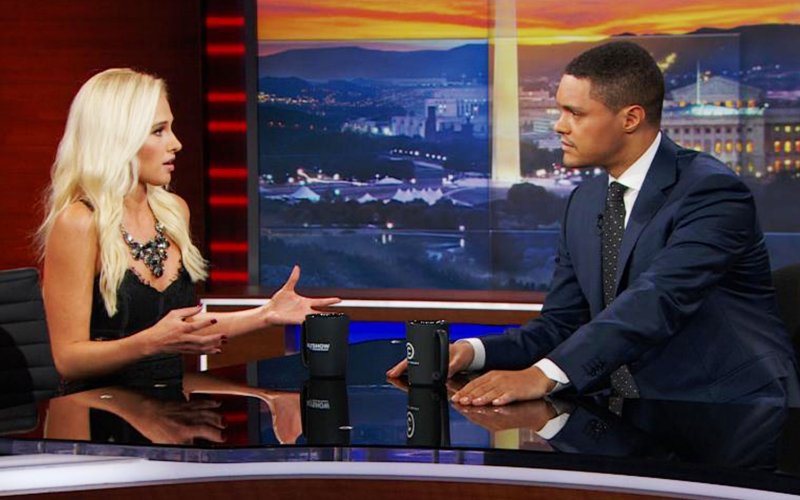 Via The Daily Beast

On November 30, 2016, “Daily Show” host Trevor Noah interviewed “Tomi” host Tomi Lahren. The twenty-six minute interview covered a range of topics, from Black Lives Matter (BLM) to immigration to ObamaCare to so-called “color blindness.” The interview was extremely engaging overall, as Lahren and Noah stand on two very different sides of the political spectrum, but one thing in particular stood out to me. While talking about the BLM movement and Colin Kaepernick’s protests during the National Anthem in August of 2016, Tomi Lahren stated “I don’t protest because I’m not a victim. I chose not to victimize myself.”

At this point, I had to pause the video and take a breath… because, wow. “I chose not to victimize myself,” what an ignorant and just abhorrent statement to make.

Not only is Lahren suggesting that those who are protesting, especially in the case of BLM, choose to be victims of oppression (which is just outright wrong, who would chose to make themselves a victim of the systematic oppression and prejudice every black and African American person faces in this country); she is also suggesting minimizing the outright racism and bigotry faced by people of color in the United States.

Her case is that she is a woman, a marginalized group in this country, yet she does not protest to improve her own status or the status of women. Which is only a semi-valid case to make. Yes, everyone is entitled to choose their form of taking a stand against their government or to choose how they enact their First Amendment rights. And, yes, everyone has the right to critique those who do not agree with them. However, you can’t claim that because you do not protest, those who do are making themselves victims. You may or may not be a victim of oppression whether or not you protest. Furthermore, no one chooses to be a victim. No one wants to make their lives harder by “choosing” to be in a position where you have to work twice as hard to get half of what those in power receive. Women, for example, make 80 cents for every dollar a man makes. And that’s just white women. In 2015, Black women made 63 cents to the white male dollar and Latina/Hispanic women made 54 cents to the male dollar, according to a 2015 study from the Institute for Women’s Policy research. No one would choose to have this pay gap, yet it still exists.

Everyone is entitled to their own opinion, but no one is entitled to their own fact. And it is a fact that being a person of color makes you subject to discrimination in the United States. For example: according to a study done in 2014 by The Leadership Conference, “Police are more likely to pull over and frisk Blacks or Latinos than Whites. In New York City, 80% of the stops made were Blacks and Latinos, and 85% of those people were frisked, compared to a mere 8% of white people stopped.” That is a fact. No one gets to deny statistics and facts like this one; not you, not me, and certainly not Tomi Lahren. And no one gets to minimize or dismiss statistics and facts like this one, which Lahren does when she claims that protesters like Kaepernick are choosing to make themselves victims.

That kind of dismissive rhetoric is extremely dangerous. It puts people into boxes labeled “other,” or “things I don’t care about because it doesn’t affect me.” Instead of making racism people of color’s problem, we need to band together to make sure everything in our government’s power gets done to end systematic oppression. Just because people of color don’t make up the majority of this country doesn’t mean they don’t deserve to be heard or to have their rights as Americans respected. Just because it doesn’t affect you doesn’t mean it isn’t unjust or wrong.

As a woman, I am offended by Tomi Lahren’s statements. We are a marginalized group in this country, and in most countries. We are victims of prejudice, oppression, and discrimination. But being a victim does not mean we are weak. And you cannot blame women for anything that has happened to us. Instead, recognize that women have to work twice as hard as men and receive only half of what men do. As someone who works in a pretty male-dominated field, television, Lahren should be aware and angered by this fact. Instead she seems complacent. She seems to think that because she has made it, so can everyone else who is marginalized. She doesn’t seem to care about women’s issues. (Watch this video, in which Lahren claims that the wage gap and women’s reproductive health and rights are not real women’s issues.)

Tomi Lahren is someone who has risen to fame over the course of this past election cycle. She claims to give a voice to those who are silenced by liberals and Democrats. She claims to be an advocate for freedom of speech, which is ironic, since she silences liberals and Democrats every chance she gets and invalidates the right to freedom of speech for those who disagree with her. I respect her position and her right to have opinions, but I cannot respect her hypocrisy and demonization of minorities.